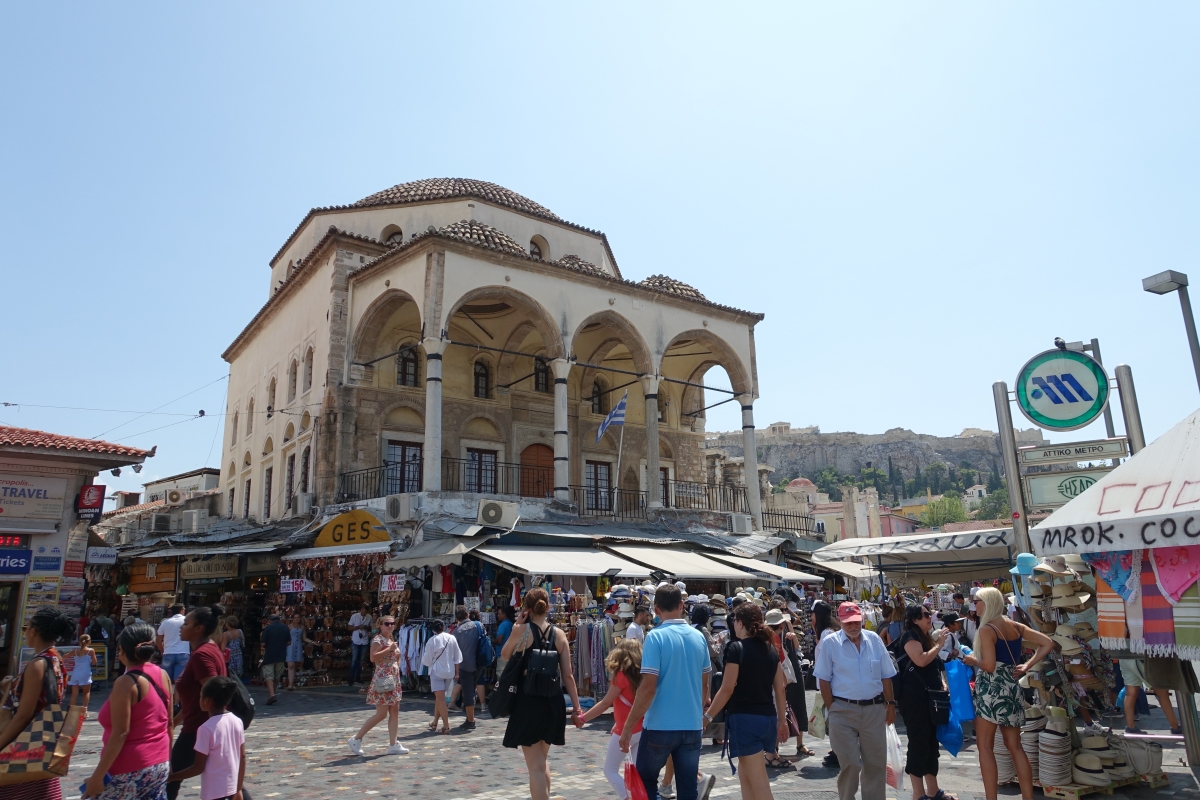 Visiting Athens activated a mixture of emotions like no other city before. I  enjoyed many things from this trip, but was revolted by probably just as many other things.

The source of democracy, the beautiful places and the captivating stories were  shadowed by the thieves, the dirt, the neglected buildings and the crazy roads.

I was really enthusiastic about this vacation. Probably even more than I am with every other occasion when I get to travel and explore new places. And that’s because we were taking with us my parents and my parents-in-law. Quite a group, I think you will agree on that 🙂 ! So I had made a very thorough list of the things that I wanted to show them. But I failed to read well about the safety rules and the places to avoid.

So here is our story, how we got robbed two times on the same day and the red-alert  zones from Athens.

Omonia Square is actually one of the most important squares from the city.

After Greece became an independent state in 1832, and Athens was named the Capital city, two major squares were built: Syntagma Square (The Parliament Square) and Omonia Square. They are connected by a well known boulevard, Panepistimiou, lined by all the major banks and university buildings.

But the national importance of Omonia doesn’t make it safe or clean at all. Because it’s a paradise for thieves and apparently drug dealers as well. And the secondary streets that branch from this square, you’d better try to avoid at night time. It’s actually at Omonia that we were first robbed, but in the underground, in the metro-station.

Victoria Square is one metro station away from Omonia.

This is actually where we booked our AirBnb Apartment. I was so happy to find a good apartment in such a central area, close to the Victoria Subway station and at a walking distance from many of Athens attractions. But while the apartment was nice, the neighborhood was so dirty and smelly and populated with all sorts of characters and I would not recommend staying here.  Better consider staying 4-5 metro stations away from the central area. On the last night in Athens, we had to change accommodation somewhere close to the Agios Dimitrios metro station. This neighborhood was cleaner and felt safe and accommodating.

Monastiraki Square is also one of their most important and historic squares.

Roman Agora starts here and Ancient Agora is just a few minutes away.  But because it is a magnet for tourism and it’s crowded most of the times,  it’s also a home for the thieves and beggars. Ermou street is on one side of Monastiraki Square and is packed with ruined buildings and trash, and the narrow streets that converge from it are filthy and smelly so much that I’d wish I had a mask to wear over my mouth and nose.

Because all the bad things in Athens happened to us in the metro trains, it’s where I advise you to watch your back the most and hold on tight to your belongings.

Watch over your shoulder – How we got robbed

I think the first mistake that we made, was to look too much as tourists. We were a big group of 6 people, holding maps, quite cheerful and dressed for vacation. It was actually like holding a big flashy sign for TOURISTS.

In my own and personal case, because I have traveled a lot, I’m probably excessively cautious, with my stuff. But my parents were not. Although, they actually were too. But these thieves, they are just so good at what they do…

We were at Omonia metro station, changing trains. When getting into the train, a big guy went before me and my mother, and he was blocking the way. So obviously a lot of people got crammed behind us and this guy. I told him to make way and pushed him aside. I managed to pass, but he then quickly blocked my mother. And before managing to take her besides me, her wallet got stolen from her backpack. Fortunately, it was empty of money and documents… Just an old wallet so it was not a fruitful steal for the thief!

All this experience made us even more cautious, but cautious is not enough.

That same day, when returning from Monastiraki Square, in the metro train again, my father was holding his bag tight with his hand in front of his chest. You don’t want to be robbed again, right!? But, even so, a thief still tried to steal from him by opening one of the smaller pockets. But my father saw his move, made a shout at him, and the thief just calmly left, no other person actually appearing surprised or trying to help in any way. Part of the daily life happenings I guess… And all this time, we did not see any guardians inside the metro stations or the metro trains. We actually did not see any police in the crowded squares of Athens…

Well, don’t worry though, I have also good things to say about Athens. Keep an eye for the next Travel Article about Athens, that will be a lot more cheerful, I promise:).